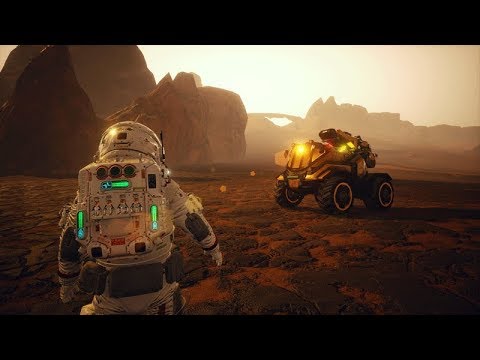 JCB Pioneer: Mars begins as the player awakes from a crash, surrounded by the wreckage of a Lander vehicle amidst falling debris and hurtling winds. Survival is the first goal – the location of oxygen and the founding of an outpost. As the player slowly begins to establish themselves on Mars, learning to combat the planets fierce and hostile weather patterns, they’ll begin a larger operation of colonization. Life-support infrastructure is crucial but so to is the mining of natural resources, part of a broader mission to save an ailing Earth.

JCB Pioneer: Mars is a hardcore blend of survival and construction gameplay set on a hostile, alien planet. Meteor strikes, dust clouds and electrical storms all threaten the player’s survival and chances of a successful colonization effort. Equipped with the futuristic, heavy-duty construction and mining vehicles specifically designed by JCB Engineers, every would-be astronaut has a chance of surviving and thriving in the face of extreme planetary challenges. Esteemed astrophysicist, Dr Maggie Lieu, provided advice to Atomicom during the development process, as well as making an in game cameo appearance.