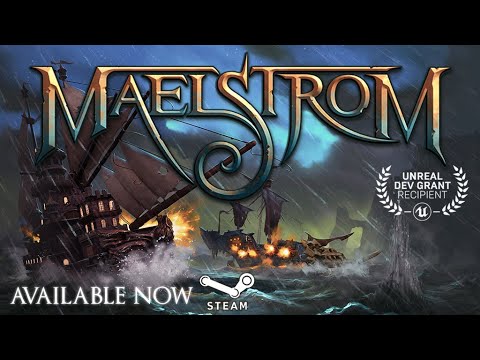 Load the Cannons!
Players begin each battle on the outskirts of a large map filled with fog banks to hide in, swift currents, deadly maelstroms and monsters. By sinking NPC ships or other warships, players collect treasure and powerups (called boons) which grant significant combat bonuses for the rest of  the battle. When a ship is sunk, its loot bobs to the surface, to be snagged by whoever can swoop in fastest!

As more players sink, the monster infested ‘Dead Waters’ encroach on the outer areas of the map, reducing the play area and forcing a climactic showdown. Entering Dead Waters is not an instant death sentence, but no captain can avoid the wrath of the beasts which lurk there for long. Only one ship will be left afloat. All players receive rewards based on the gold collected during battle, bounties claimed by sinking others, and how long they survived.

More About Maelstrom
Featuring naval combat with magic and monsters in a flooded fantasy world, Maelstrom is a third person action strategy game where you captain an Orc, Dwarf or Human warship and sail the turbulent Abyssal Ocean to play online battle royale based multiplayer, solo or with friends, in free for all matches.

In Maelstrom you command a customized warship with a handpicked captain, crew and equipment offering a range of special advantages. From fast Orc raiders focused on ramming and boarding to mighty Human frigates decked out with cannons and armor for a long ranged brawl, there are extensive choices before you even hit the water.

Once the wind is in your sails (or your furnaces are running hot, if you’re piloting a Dwarven vessel) it’s a battle to the death, with the last ship afloat the winner! You’ll need to watch the angle of your cannons, keep your strongest armor facing the enemy, and avoid or utilize the many dangers of the sea. A final word of warning… keep a sharp eye out for the enormous leviathans lurking beneath the surface of the dead waters!