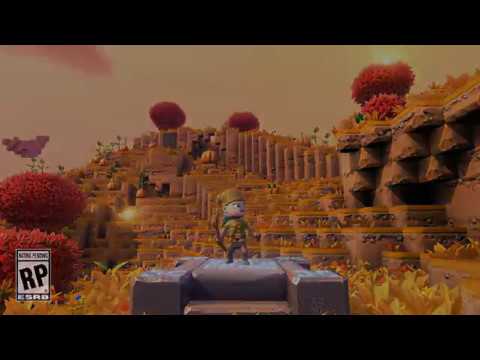 Portal Knights is a 3D sandbox RPG featuring randomly generated worlds, crafting, 3 players classes, and unique leveling system. Players are transported into exciting realms of magic, monsters and mystery. Craft your own journey within the solo experience or become part of a four-player multi-player adventure. Across spectacular dungeon crawling, castle building and boss battle, Portal Knights allows players the chance to visit other worlds and biomes as they progress through the game, whilst the game’s skill tree and lightweight levelling system allows players to set goals and vary to different styles in unique role-playing game (RPG) player classes.

The Portal Knights adventure begins as players create their character as a Warrior, Mage or Ranger from a multitude of customization opportunities that can be continually enhanced throughout the game. Once a character is created, players are immersed into the world of fun and fantasy with dozens of randomly generated environments, each one uniquely populated with enemies to vanquish, treasures to discover and resources to mine. Across this dangerous ruinous world, the action-packed journey features an interconnected web of ancient portals inviting players to craft, battle and build their own adventure on a quest to become the ultimate Portal Knight!

•Travel between randomly generated 3D sandbox worlds – Traverse unique environments, discover creatures and resources for crafting. Explore caves, mineshafts and dungeons filled with surprises.
•Tactical action combat – Strike foes and dodge their attacks in fast-paced third-person battles. Outwit each enemy’s unique AI and choose from an assortment of weapons and spells to defeat them!
•Unique RPG classes to choose from and master – Play as a Warrior, Mage or Ranger and customize appearance, abilities and gear.
•Epic boss battles – Face off against the Portal Guardians, the most formidable beasts in the realm, in their twisted arenas.
•Gather unique resources from across the worlds to craft an arsenal and supplies – Upgrade crafting stations and expand the recipe list to +100 items, complete with specific crafting trees based on players’ character class.
•Construct a stronghold from dozens of materials and furnishings – Display the hard-earned treasure from players’ journeys. Plant a farm and reap harvest as crops grow in real time.
•Join friends in 4-person cooperative multiplayer – Throughout the whole experience, build structures, explore dungeons and team up together in combat.