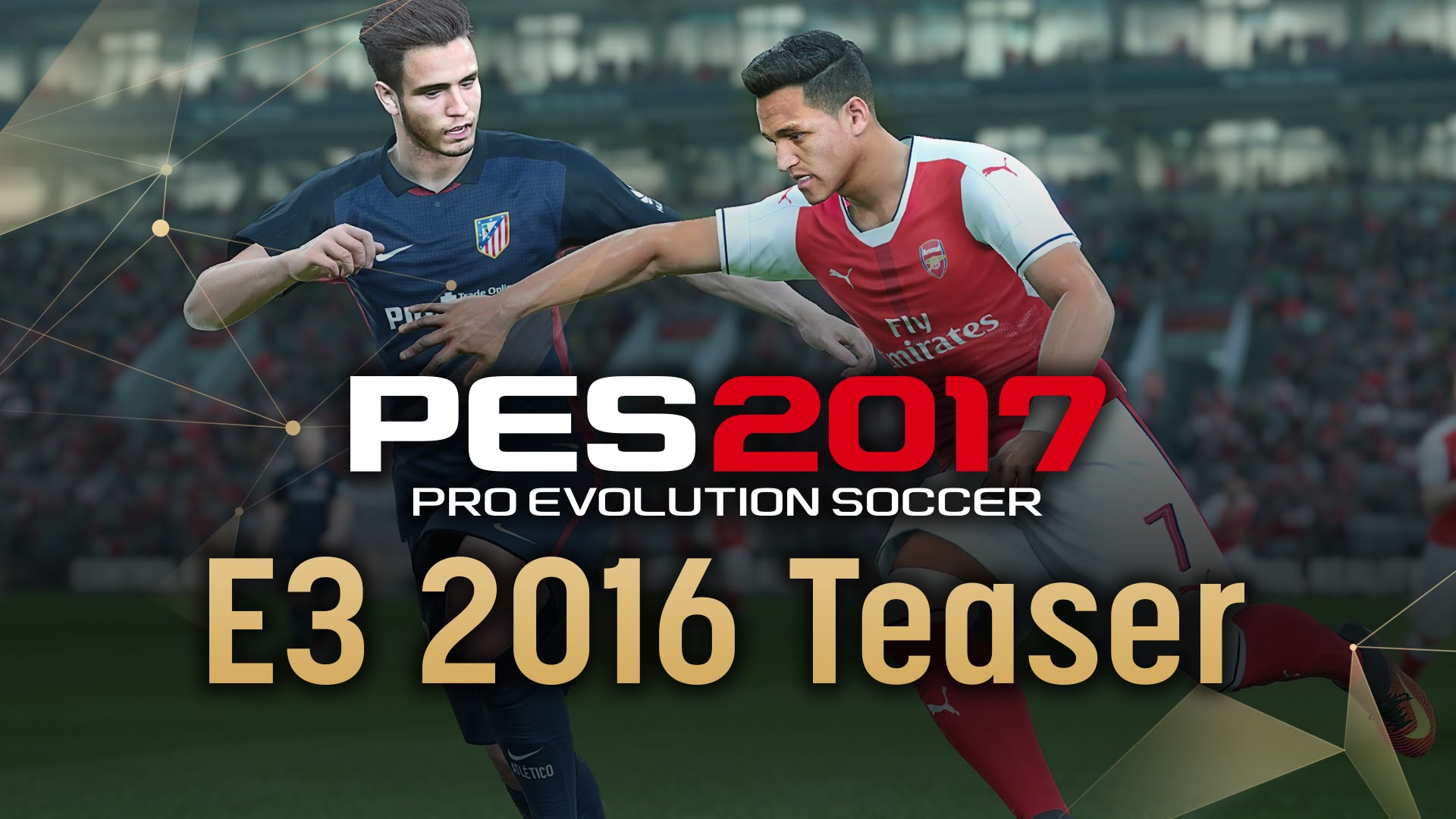 Pro Evolution Soccer 2017
Pro Evolution Soccer 2017 sees the return of the multi-award winning franchise complete with an abundance of new features and quality improvements. PES 2017 aims to retain its title of Best Sports Game’ for a third year, as voted across the world at games shows and by major media outlets in 2014 and 2015.

Fundamental Gameplay Changes
•Real Touch – In football, what dictates and separate the best from the rest is 1st touch control. In PES 2017 the 1st touch in calculated by player attributes as well as the further inclusion of real ball physics directly controlled by the input ball touch. See how different players control the ball in unique and different ways based on where and how you control them, dictating the flow of the game based on how they react to the unpredictable movement of the ball. In addition, there is more control in how you receive the pass, and depending on the pass the player can visually execute the exact play intended, from receiving a pass to sending the ball out again.
•Precise Pass – Combining Real Touch and real ball physics, passing is an art form in PES 2017. Many factors determine the speed and accuracy of the ball. The base is the player rates and skills, and adding to these are the players direction and angle that links to the natural, satisfying animation to follow. The pass that is made on the best situation and timing will generate a perfect trajectory, creating a great satisfaction when a killer pass is made.
•Authentic Visuals – For PES 2017 the visuals have seen a major upgrade, offering Authentic Visuals thanks to the further incorporation of Fox Engine. The lighting sources have increased by double this year as well as the crowd models and pitch textures overhauled, making the visuals more realistic than ever. Details such as being able to see the players breathing in winter, the net to splash some rain off when the ball hits in rainy weather, and the debris of the pitch flying when they are kicked up. Shadows in the day matches are more recognizable, and some of the spray line for the free kick lines are seen throughout as subtle enhancements. Nothing has been left untouched, from player models, lighting, crowds, pitch and stadiums totally revamped. Never has a game looked so real
•Natural Player Movement – New features such as Real Touch and Precise Pass see huge benefit as hundreds of new animations have been added, giving a vast array of movements when trapping and passing the ball. The player interactions (collisions) are also further developed with player individuality clearly represented in detailed movement (e.g. Giroud strong in physicality, Özil strong in balance). The representation for balance in the body when being physically challenged is strongly supported through the 2 new parameters.
•Goal Keeping – Keepers see a great jump in quality through added motions and animations, creating the most agile keepers in PES history. They instantly react to shots including a fast follow up, springing into action after landing. Further improvement have made to a variety of situations the Goalkeeper will face, including 3 significant areas. These include deflection when the shot is near their feet, instant reaction to shot to the side they are not expecting, and fingertip saves to defend shots right before it goes past the goal line. With the new intelligent keepers scoring a goal will not be a simple task. The ball physics when the keeper saves is close to real life, which can be seen in how a shot is deflected based on which part of the keeper it hits. Attacking moments will be more dramatic than ever, bringing the best feeling of achievement when that goal is scored.
•Total Team Control – The series is known for incredible depth when controlling how your team plays, and with Total Team Control in PES 2017 users have new on the fly options during a match. Users can instantly change the attacking and defending mentality of the team, which can be tweaked and carefully controlled with simple controls, being able to immediately react to the unpredictability of the sport. Defend a lead or drive the team forward to score a goal, the choice is yours.
•Corner Kick Control – Control the defensive and offensive strategies on a set pieces to add a new dimension to corner kicks. By tapping the d-pad on a corner, a variety of options come up allowing the user to tailor each moment to their playing style. Defensive options include choosing to marking zonal or Man to Man. Offensive options are also included, such as flooding the 6 yard box, or ‘Train’ which sees players attack the ball in a straight line.
•Advanced Instructions – Strategies that are quite individually defined such as Tiki-taka and tight marking which is strongly based on team ideology can be now set in “Advanced Instructions”, which adds a huge variety in how you plan to win. The renowned strategy to go in for heavy pressing such as Gegenpressing , the counter target strategy to not go all-in on pressing and heavy man-mark that some teams put into practice are all in this strategy setting. This vividly adds that team identity and makes winning more rewarding, but most of all making the match more fun through tactical strategies.
•Adaptive AI – For the first time in a football game, the AI will learn how you play, listen to your strategy plans, follow your Advanced Instructions, and change their tactics accordingly! Pass to a star player often? The opposition will double up on him and mark heavily. Like to constantly play down the wings? Players will cover their fullbacks to make you think twice! The AI will also adapt its attacking tactics, so if you are intercepting the opposition’s long passes they will change to a short passing game! Player and team behavior has always been a staple of the PES series, and for PES 2017 Adaptive AI will change sports games forever.

myClub
•The Scouts required to sign the player you need is now available through the auction house. If you sign the right Scout with their specialty areas covering your star, scouting him will be so much more higher in chance. 2017 functions support the scout to make sure they try their best when you specifically describe the player you want to sign.
•It is now easier to sign players below the rate of 75 through Top Agents and Special Agents
•New tutorials have been created when starting myClub, making it easy for newcomers and veterans to learn everything about the mode.
•Now you can check your opponent’s play style and tendency when matching on online matches with Match Analysis. Observe and learn your opposition’s approach, and change your Advanced Instructions to take command and control of the next match.

Master League
•Significant changes to the transfer system, with new dedicated budgets for transfer funds and player wages. More variety in the negotiation such as 6 month loan, and signing the player during his loan period
•The element of time has been added to the last day on transfer windows, setting a deadline to add excitement and tension to sign your players, just like in real life football.
•Directors will also play their role on giving advice to the player for negotiations.
•Team role which has been a popular addition since 2016 sees further enhancement with now 22 roles compared to 10 in PES 2016, with added roles such as ‘Hero’ and ‘Bad Boy’. This allows for more character establishment for your team.
•Player Growth system has been improved, with players now acquiring not just abilities as in PES 2016 but also skills. Some players may see a boost in their abilities while on loan.
•Day and night match balancing throughout the season, taking into account real life kick off times.
•Training system has been further improved, with players now being able to learn skills and establish their play style through Training. In PES 2017 players can now learn their position, enabling you to further realize your ideal player and team.

Versus – Match Analysis
•New feature within certain match modes tracks your player history for offline matches with friends, as well as your playing styles
•Never have to wonder who is better between you and your friends, as the mode will track everything from games won, lost, drawn, to goals scored and conceded
•Versus also deeply tracks playing style, such as possession play or if you like to counter attack. It will also let you know your favorite move, such as sliding tackle or interception

Quality Improvements – Many important elements are upgraded per fan feedback.
•Referees – Improved judgment on player collisions to determine fouls. Smaller fouls will be called up, as well as extra intelligence when playing the advantage rule, including going back to book players after an earlier challenge
•Stadiums – Additional stadiums added, from new licenses to original designs. Brand new pitch turf designs give variety, as well as new options on goal net types in edit mode, which adds a unique look to every stadium you play in.
•Live Update – Available as a Day One update when users connect online. Weekly updates will now be able to be downloaded to all offline modes. This will enable all users with online connections to play with the latest rosters. This will also apply to European transfers for winter, the long wait is now gone from your worries.
•Presentation – Completely new menu design throughout the game, from main menu to pre-match settings to gameplan. Significant upgrade to match presentation, including new HUD and redesigned highlights and replay system.
•Vibration – New controller vibration adds the feeling of being in the thick of the action. Varying vibrations for impact and player collisions, as well as shots and when the ball hits the post.