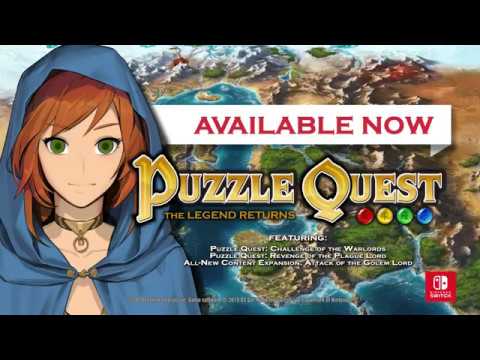 Puzzle Quest: The Legend Returns builds on the award-winning Match-3 RPG gameplay that surprised and delighted players around the world when Puzzle Quest: Challenge of the Warlords first launched for the Nintendo DSTM family of systems in 2007 – and offers a treasure chest full of brand-new content, including new quests, classes, spells, items, and more!

Puzzle Quest: The Legend Returns is a unique match-3 puzzle game wrapped in a deep and immersive strategy and role-playing experience.  Explore the many locations within the kingdom of Etheria, deep in the Agarian Forest, rekindling relationships or making new ones along your path.  Head into battle and match three or more gems in a row to gain mana used to cast spells, clash with opponents, collect items and rewards, increase experience, and ultimately be VICTORIOUS!

Select from your favorite character classes or choose from one of five new classes including Blood Mage, Priest, Monk, Paladin, and Elementalist.  Puzzle Quest: The Legend Returns brings more than 100 new quests, spells, and items, and a host of new monsters, bosses, and more!

Test your skills in an epic journey against monsters and villains to save the kingdom of Etheria.