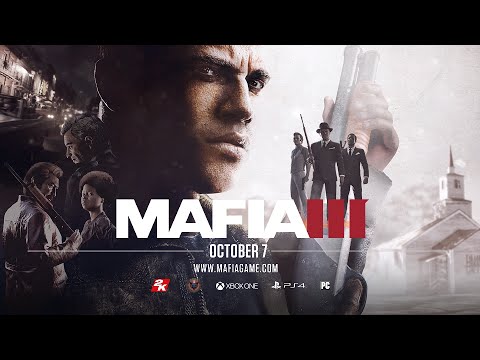 Mafia III Collectors Edition
1968. New Bordeaux. After years of combat in Vietnam, Lincoln Clay knows this truth: family isn’t who you’re born with, it’s who you die for. When his surrogate family, the black mob, is betrayed and wiped out by the Italian Mafia, Lincoln builds a new family on the ashes of the old and blazes a path of military-grade revenge and redemption through the Mafioso responsible.

The Mafia III Collector’s Edition is packed with physical and digital items, providing a window into the sights and sounds of a turbulent 1968 New Bordeaux, Louisiana, the vast, diverse and seedy criminal underworld of Mafia III.

Includes full game and all bonus digital content found in the Mafia III: Deluxe Edition, plus:

•The Art of Mafia III Collectible Art Book by Insight Editions: A 56-page visual look at the creation of New Bordeaux, a new game world fashioned after New Orleans in the summer of 1968.
•Lincoln Clay Replica Dog Tags: 1960’s US military issue replicas, these are the tags of a combat-hardened Vietnam vet fueled by the need for military-grade revenge against the Italian Mafia.
•Faux Leather Establishment Drink Coasters: Representing the Paradiso Casino and Sammy’s in-game criminal establishments, these aren’t just souvenirs, but symbols of Lincoln Clay’s motivations for revenge.
•Exclusive Collectible Art Prints: From Playboy and the Alberto Vargas Estate representing a vast collection of art for players to discover in-game.
•Mafia III: Original Game Score: 180 gram vinyl pressing of the original game score of Mafia III. Composed by gaming greats, Jesse Harlin and Jim Bonney, it’s a Rhythm and Blues inspired tour through a city ruled by organized crime and corrupt officials and the setting for Lincoln Clay’s emotional story of loss and revenge.

•Mafia III: Official Soundtrack of New Bordeaux: 180 gram vinyl pressing featuring some of the 60’s greatest hit makers and the artists that inspired them. As a sampling of the complete in-game soundtrack, it is an eclectic mix — Rock, Rhythm and Blues, and Pop, all colliding against a backdrop of war, civil unrest, and sweeping social changes that defined the 1960s. •SIDE ONE: •”Black Ghost Blues” – by Lightnin’ Hopkins

•”Paint It, Black” – by The Rolling Stones
•”Tramp” – by Otis Redding & Carla Thomas
•”I Got My Mojo Working” – by The Shadows of Knight
•”Walking The Dog” – by Rufus Thomas
•”All Along The Watchtower” – by Jimi Hendrix

Features:
•NEW BORDEAUX, A REIMAGINED NEW ORLEANS: A vast open world ruled by the mob and detailed with the sights and sounds of the era.
•A LETHAL ANTI-HERO: Be Lincoln Clay, orphan and Vietnam veteran hell bent on revenge for the deaths of his surrogate family
•REVENGE YOUR WAY: Choose your own play-style; brute force, blazing guns or stalk-and-kill tactics, to tear down the Italian Mafia.
•A NEW FAMILY ON THE ASHES OF THE OLD: Build a new criminal empire your way by deciding which lieutenants you reward, and which you betray.