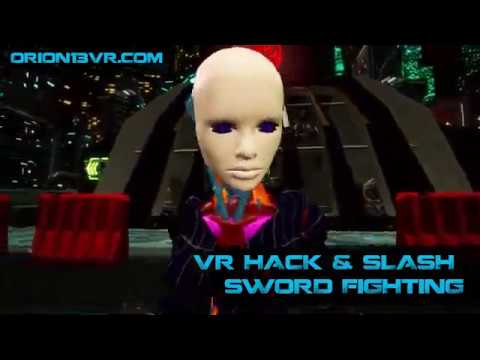 Orion13 is a futuristic VR sword-fighting adventure that features intense hack-and-slash combat, complex full-body challenges, and a cinematic story arc complete with a cast of friends and deadly foes.

The story-driven, action/adventure game will fully immerse players in a robot-ruled, dystopian society saturated in intense colors. Players take on the role of Orion13, a newly self-aware robot warrior who believes her memory implants are her own. She has just one mission: to escape her enslavers and find her way home.

Orion13’s virtual landscape is interactive and visually unique, characterized by VRFocus as “a neon-drenched sci-fi experience.” Hardcore gamers will delight in the intense combat mechanics and what VR Fitness Insider described as “brutally fast VR sword-fighting that will put your skills to the test.” As Orion13, players battle an onslaught of robots and bosses; decode panels and puzzles; navigate VR platforming with exciting jumps and drops; maximize their full-body character in deadly minefields, laser mazes and catwalks; and get help from friends along the way as they fight through a giant multi-level robot metropolis.