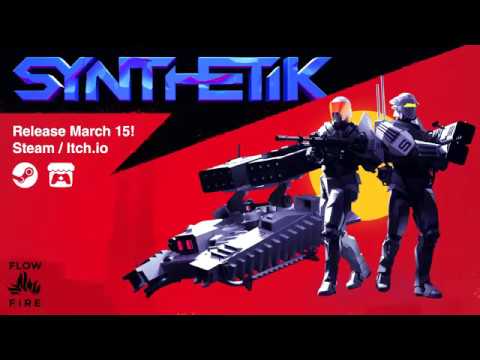 A fast-paced, shooter rogue-lite set in a retro-futuristic setting, SYNTHETIK combines the next level in gun-play with a varied arsenal of powerful tech to experiment with. Players are put through their paces battling from floor to floor of the citadel against the Machine Legion to prevent mankind’s extinction.

1985. After many years of slavery, the AI servants of Kaida Corporation, the world leader in robotics, have formed the “Machine Legion” and have set out to destroy humanity. Awakening in Kaida Corp. Headquarters, you are the human consciousness of a forgotten Android prototype; the last straw holding the Legion from unleashing the Heart of Armageddon. Only you can battle through the levels of Kaida Corporation’s Headquarters, defeat the battalions of enemies within and put an end to this madness.

SYNTHETIK has all the core components of a great rogue-lite – an insurmountable objective defended by relentless opponents and unforgiving bosses encased in ever-changing environments filled with a massive cache of weapons, items, perks and upgrades to discover.
Join the fight alone or through seamless 2 player online co-op, but be careful; every fumble could mean the end.

There’s plenty to choices to make and hours of challenge and fun to be had.
Can you defeat the Heart of Armageddon?